The church started as a Mission Church in the 1850’s, served by a travelling priest.

The present building was built in 1867 on land donated by a prominent local businessman and politician, William Cornock, after the closing of a distillery that he owned. At that time the church was smaller than now with the east wall located at the present archway leading to the Sanctuary.

Until about 1925, All Saints was ministered by students from Wycliffe College in Toronto.

The Bell Tower was added in 1910, along with the bell which is still rung before Sunday services.

The lights in the nave of the church were installed and dedicated in 1928. The church was finally consecrated in 1934, 67 years after construction.

The Women’s Auxiliary was formed in 1895 and continued vital work in supporting and organising church life until the 1950’s when a number of new groups were formed reflecting changing needs of church life.

The most recent expansion was in 1980 when the old drive shed/parish hall was demolished and a modern two storey extension added to the back and sides of the church. Parishioners carried out much of the work.

In 1986 the parish welcomed their first full time rector. 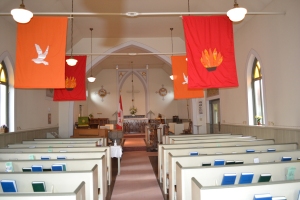 In 1987, the sanctuary was elevated and extended and the altar, pulpit, organ and choir stalls moved into the extension. New pews and kneelers were made and installed. The new sanctuary was rededicated on November 1st 1987, being All Saints Day, but the interior decorating and stencilling was not completed until 1989.

The original murals and stencils, which had been covered in previous renovations, were found behind the walls and were copied so the church would reflect the original décor. The artwork was done by Thomas Browne, son and nephew of the artists who carried out the first stencilling.

The new walkway and wheelchair ramp were completed in 1991 and the pipe organ installed and dedicated in 1994.

The final phase has been the installation of the prominent white spire to top off the bell tower in 1995.

In celebration of the 140th anniversary of the church in 2007, a garden was created at the back of the lower church hall.